Inching My Way Out Of Long Course “Retirement”…Part 3

Last season ended badly yet I still have a grand plan to complete my first Half Ironman since 2014 (Ironman 70.3 DesMoines in mid June).

I have a lot of work to do.

For starters, I found my bike trainer and set it up for the first time since 2014. I’ve been getting 2-3 training rides/week.

I rejoined the gym and started twice weekly pool sessions. I also started going to a spin class once/week.

I bought a Half-Ironman Training plan book by Don Fink and mapped out a training schedule starting in early March.

I am still struggling with run training (I hate the treadmill, and the roads are too icy and treacherous). I need to work on that.

Fitness and physical activity are starting to be a part of the routine again. That feels good.

My base fitness is coming along better then in any of my recent off-seasons. This is key since the race is so early in the year. I am really hoping for an early spring. I’ll be able to start on my training indoors, but the sooner I can get outdoor for runs and rides the better. Despite the train wreck during the second half of last season, I am cautiously optimistic about this race.

So, here’s the schedule I have locked in so far:

I think my wife still reads my blog. She has stated that it is the only way she finds out about what shenanigans I’m planning. That last paragraph will be news to her… (Hi dear…love you…please dont kill me…)

So, a little bit of explaining about the two “possible” events.

Ironman 70.3 Wisconsin has been on my radar for a few years, but I have always been reluctant to pull the trigger. This was partially because of the very early race date (much easier for me to train during the summer for a late season triathlon). But the course also scared me. More specifically, the thought of doing that course in bad weather terrified me…and it has had lousy weather every single year. The lake is big, so it can make for a very cold/rough swim. My experience in Racine 2013 has made me very leery of those rough water swims. The bike is very hilly and technical. My bike skills are not great, but I can handle the course. But the thoughts of steep downhills with sharp turns and no breaks due to heavy rain is not something I am ready to risk. This race has had bad weather almost every year. Training for a race just to take a DNS is not something that I was motivated to do.

That said, I was about to take the plunge this year when Des Moines was announced. Smaller lake, flatter bike, warmer climate, a week later (helps with training). It was an easy choice.

But, I still have Wisconsin on my mind. It is one week earlier then Des Moines, so I will be trained. It’s a race that doesn’t sell out, so I could do a last minute sign up if the weather forecast looks good. I could drive down Saturday, register, stay one night, drive back home after the race. If the weather sucks (or if it did sell out), no big deal…I still have Des Moines. It is likely my only shot at this event. It is tempting (and it would be nice to have 2 chances at completing a 70.3 distance this season). I would say the odds of me going though with this hair-brained idea is about 1 in 4 (or less).

A return to a full marathon has been a goal for 1-2 years. I have been discouraged by my lack of speed and stamina lately. I just turned 50 and want to know if I can still do it. I got burnt out on running marathons (up to 6 a year) and they had lost their magic. But my last marathon was 2016, and I am getting the itch again now that I am 50.

If I did another, I would want to do something big and special. I would want to run a World Major Marathon. There are 6 of these. The 3 overseas marathons are not even an option (London, Berlin, Tokyo). I will never be fast enough to qualify for Boston. This leaves Chicago and NYC. Both are lotteries to get in. I was contemplating entering both lotteries in 2021.

Logistically, Chicago would be the better choice. It’s closer (I can easily drive there) and the lottery odds are pretty good. But, NYC is a very appealing race to me. I love NYC. The race goes thru all 5 burrows, and it is the biggest marathon in the world (over 55,000 participants). The odds of getting in by lottery is slim (about 12% by lottery the last time I checked). It’s a dream that likely will never become a reality.

Last week, someone posted on FB that the lottery has opened. It was also the 50th anniversary of the race. I didn’t plan on entering this year…but I did. If I get in, I will have several months to train after the early end to my triathlon season. Its a longshot, but it just seemed too good to pass up. Lottery results will be posted at the end of the month. Assuming I dont get in, I’ll start run training more regularly and look more seriously at Chicago 2021.

It appears that I have entered Midlife Crisis v2.0.

Inching My Way Out Of Long Course “Retirement”…Part 2

Since my last post 8 months ago, I have been trying to keep up the momentum and returning to longer events in 2020.

Since my post, I participated in my first Tour de Tonka bike ride since 2014. It was also the first time that I didn’t do the 100 mile century ride. I opted instead for the 57 mile route to mimic my upcoming Half Ironman.

I was a struggle. It was slow. It was painful. I have work to do…

I was then signed up for the Twin Cites looney challenge. This is a 10k/5k combo run on Saturday and a 10 miler on Sunday.

The Saturday Events were canceled due to lightning. The 10 miler was beautiful and I felt good (but quite slow…where did all of my speed go???)

A couple of weeks later, I did the Detroit Marathon Motor City Challenge (1 mile/5k Saturday, Half Marathon Sunday). This was an absolute mess.

It turned out that my College Reunion was that same weekend. It was a 3 hour drive from Detroit. It was also a semi formal dress event. No problem, I can do it all…

I showed up for the 1 mile, and the weather was cold but beautiful. I decided to go all out. I sprinted the race start to finish. I thought I was gonna die when I crossed the finish line (damn cold/exercise induced asthma).

Not what I wanted to see. My PR is 6:43. I once did a Half Marathon at an average pace of 7:57/mile. Again, very disappointed with my lack of speed.

The 5k started shortly after that. I just did a slow recovery run knowing I had a HM the next day. Even so, I struggled since my asthma was still flaring up.

After that, I went home and changed into my class reunion suit and new dress shoes (didn’t fit very well…huge mistake) and drove the 3 hours to my old alma mater. When I got there, I had a walking tour of campus (damn shoes were killing me) then a couple of receptions where I was mostly standing around.

I left the reunion around 1am. I could barely walk back to my car since my feet were hurting so bad. I then did the three hour drive to the starting line in Detroit. Along the way, I did a quick change of gear and drank a few gallons of coffee. By the time the race started, I had been up 28 straight hours, had blistered feet, and had to run to the bathroom every five minutes.

As you can guess, it didn’t go well.

I finished in just under three hours (PR: 1:44). But about 45 minutes of that time was spent in porta potty lines.

And, with that train wreck, my season ended. 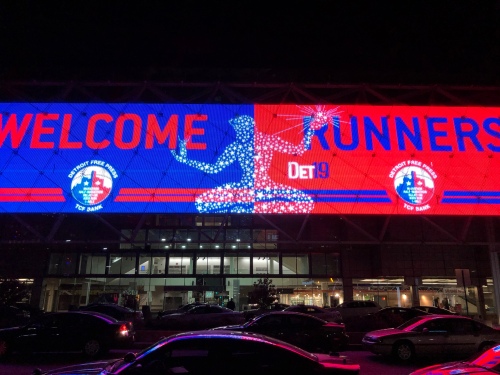 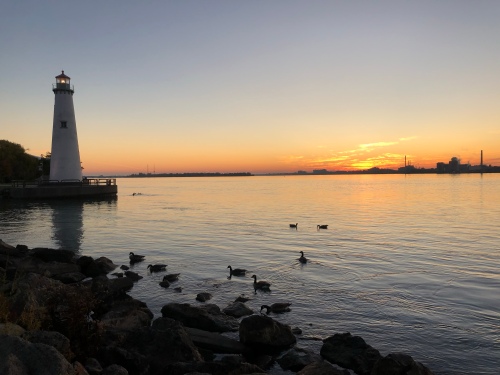 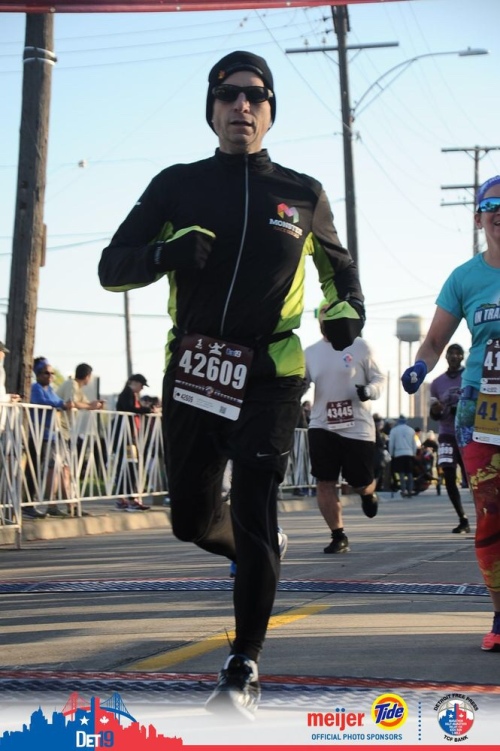 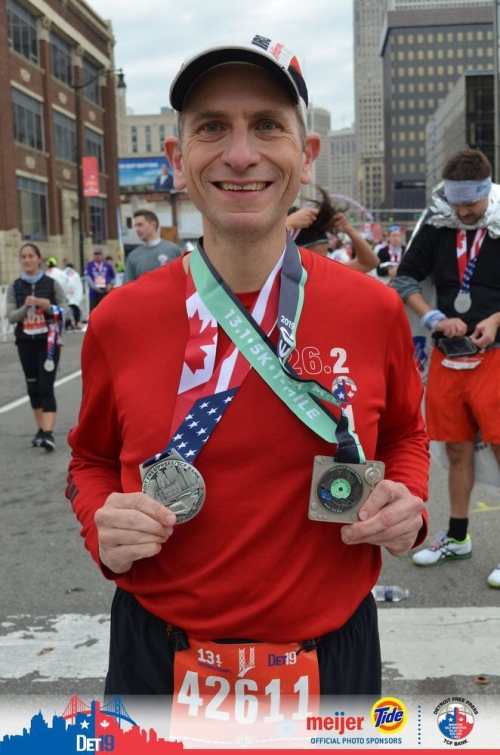 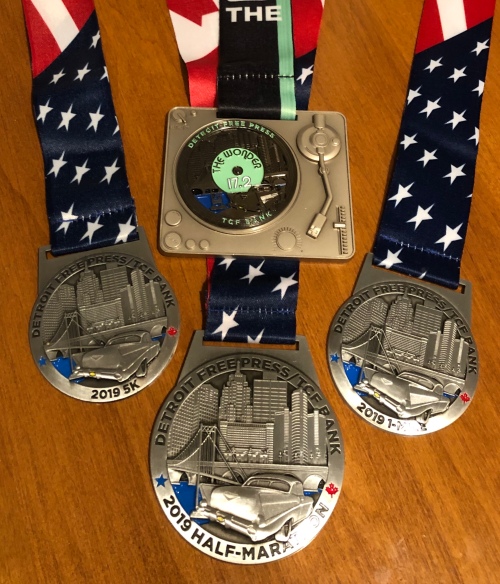